nd endodontic or root canal treatment, it helps to know something about the anatomy of the tooth. A tooth consists of the crown and the roots. The crown is the part of the tooth visible in your mouth while the roots are below the gum and anchored by the surrounding bone and gum tissue, they are usually not visible. The crown consists of two layers of hard tissue the enamel and the dentin. Beneath the dentine lies the root canal system consisting of a chamber with one or more channels that run the length of the root. Contained within the canal(s) are blood vessels, nerves, and soft tissue that are collectively called the pulp. The pulp extends from the crown of the tooth to the tip of the roots where it connects to the tissues surrounding the root.

Understanding why Endodontic Treatment is required 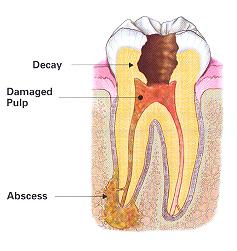 Bacteria may enter the pulp due to deep decay, trauma, cracks, repeated dental procedures or gum disease. These bacteria damage the pulp and eventually destroy it and may lead to spread of the inflammation in the bone and formation of an abscess. Symptoms of the infection may include sensitivity to temperature, discomfort or tenderness when eating, visible injury of the tooth or pain and swelling in the tooth and gums.

Endodontic treatment treats the inside of the tooth. Endo” is the Greek word for “inside” while “odont” is Greek for “tooth”. The purpose of this treatment is to remove the damaged tissue and the infection from inside the tooth, thereby saving it and restoring it to good health so that it can function properly inside your mouth.

Endodontic treatment is usually performed in two visits and involves the following steps: 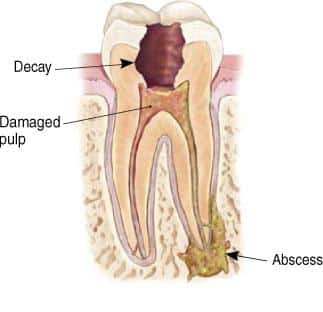 1. The dentist examines the tooth and takes a radiograph. He then administers local anaesthetic. When the tooth is numb, a protective sheet called a “dental dam” is placed over the area to isolate the tooth and keep it clean and free of saliva during the procedure. 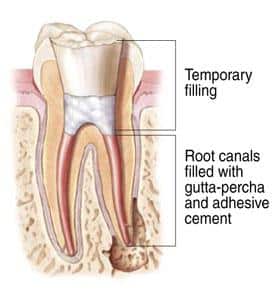 The dentist makes an opening in the centre of the tooth. He uses small instruments called files and disinfectant to clean the pulp from the pulp chamber and root canals and to shape the space for filling.

3. After the space is cleaned and shaped, the dentist fills the root canals with a biocompatible rubber-like material called “gutta-percha.” The gutta-percha is placed with an adhesive cement to ensure complete sealing of the root canals. In most cases, a temporary filling is placed to close the opening. The patient will return to his /her general dentist the have a crown or filling placed on the tooth.

radiograph of Upper Tooth – before and after Endodontic Treatment

Understanding Endodontic Retreatment – Why do I need another Endodontic procedure?

As occasionally happens with any dental or medical procedure, a tooth may not heal as expected after initial treatment for a variety of reasons:

Narrow or curved canals were not treated during the initial procedure.

The placement of the crown or other restoration was delayed following the endodontic treatment.

The restoration did not prevent salivary contamination to the inside of the tooth.

In some cases a new problem can cause problems in a tooth that was successfully treated. For example: 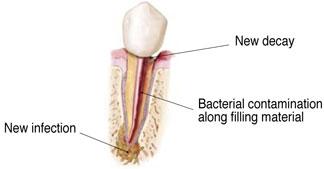 New decay can expose the root canal filling material to bacteria, causing a new infection in the tooth.

A loose, cracked or broken crown or filling can expose the tooth to new infection.

A tooth sustains a fracture.

Understanding what will happen during Endodontic Retreatment 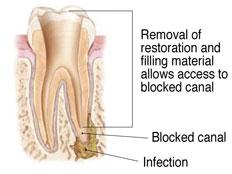 When the root filling material is removed, the dentist can clean the canals and carefully examine the inside of your tooth using magnification and illumination, to search for any additional canals or unusual anatomy that requires treatment.

After cleaning the canals, the dentist will fill and seal the canals and place a temporary filling in the tooth. If the canals are unusually narrow or blocked, your he might recommend endodontic surgery. This surgery involves making an incision to allow the other end of the root to be sealed. 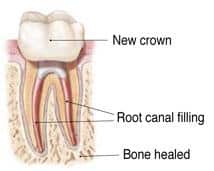 When the retreatment is completed, you will need to return to your general dentist as soon as possible to have a new crown or other restoration placed on the tooth to protect and restore it to its full function.

Occasionally non surgical endodontics may not be suitable to treat your tooth and your dentist may recommend a surgical approach. This decision can be made for a number of reasons:

to treat persistent infection at the root end.
to examine the entire root system if the canals are too narrow or blocked
to diagnose if the root is cracked.
to treat damaged root surfaces or surrounding bone.

The most common surgery preformed to save a tooth is an Apisectomy or root-end resection.

Understanding what is an Apisectomy

In this procedure, the dentist opens the gum tissue near the tooth to see the underlying bone and to remove any inflamed or infected tissue. The end of the root is also removed. 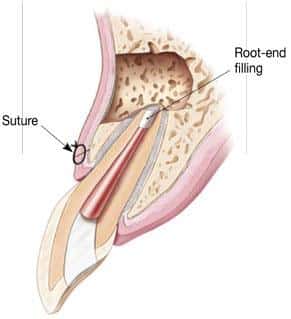 Over a period of months, the bone heals around the end of the root.

Can’t find the answer to your question?
Contact Us